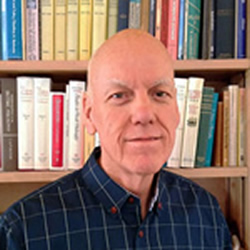 HPB’s Secret Doctrine tells us that there is a mysterious “something” that links spirit to matter,  that, in fact, allows each of us to carry spirit within ourselves. This something is called Fohat. “It  is the ‘bridge’ by which the ‘Ideas’ existing in the ‘Divine Thought’ are impressed on Cosmic  substance as the ‘laws of Nature.’ 1

In this talk we will take a closer look at this mysterious agent (sometimes called the Seven  Fohatic Brothers) who was there at the dawn of the universe, and who vitalizes each and every  one of us– who, in fact, animates all beings in all worlds. DK tells us, “Fohat is that active fiery Intelligence, Who is the basis of the internal fires of the solar system. [It is] Cosmic electricity;  primordial light; the ever-present electrical energy; the universal propelling vital force, and the ceaseless destructive and formative power.” 2

Francis Donald is an artist, musician, and a faculty member of the Morya Federation. He offers two ongoing monthly webinars: one on the Secret Doctrine, the other on The Secret Teachings of  All Ages, both available to all through moryafederation.com, and youtube.com. After decades of working as a professional musician and representational artist, Francis began painting esoteric subject matter, including a series on the astrological signs. His artwork has appeared in numerous books and publications.