Introduction to the Seven Rays: Student webinar with Eva Smith

The Seven Rays, The Plan, and Spiritual Life

Modern physics has concluded that all is energy, and that every form resides within an essential network and pattern of energy. The seven ray teaching, in scientific terms, is a hypothesis that asserts the following: 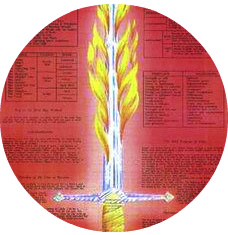 Ray One: Will and Power

This energy is the beginning and the final synthesis – the source of all other energies. It is the essence of power and energy itself. The first ray is the force of purpose, direction, centralization and one-ness, of which the will is the keynote. It is characterized by the qualities of intensity, dynamism, quickness, and dominance. It often results in detachment, isolation and crystallization. And out of its force and directness is conceived the power of creative destruction. 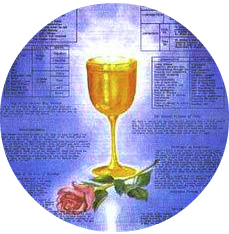 Consciousness is born of the second energy, in the union of duality, spirit and matter. This is the source and blending of light and love, magnetism and relationship, inclusiveness and coherence. It is the ray of wisdom, sensitivity and intuition, as well as clarity and attention to detail. This energy is a qualifying, teaching and healing force. It often results in attachment and attraction, and, curiously, establishes our awareness of fear, the antithesis of love and relationship. The second ray is the energy of the entire solar system and hence is also a ray of profound synthesis. 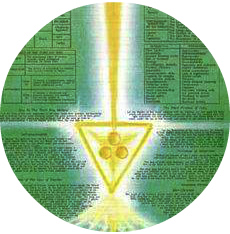 Activity and intelligence work out from this source, a result of purpose and wisdom. It is the energy of full and great manipulations, creativity and adaptability. Needs are recognized through this force, plans are formulated, material is selected and business is undertaken. The third ray is clear, inherent mental and intellectual ideation in pursuit of truth, with the objective of manifesting in matter and substance. It is the power which evokes form. 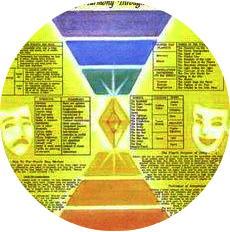 This energy stands symbolically in the center of the seven and is the magnetic relation of opposites, the point of harmony, bridging and mediation amidst conflict, pain and struggle – in a sense, the fruition of the duality rooted in the second ray. It stimulates creativity, art and beauty and is characterized by sensitivity to color and sound. Discrimination, quickness and a searching for perfection reside here. The intuitive, relational force is strong in this ray, which evokes life, love and understanding. 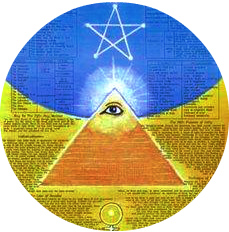 This is the energy of concretion into substance, of knowledge and science. It leads to the searching, analysis and development of ideas, which in the end produces light and wisdom. It is the energy of differentiation and investigation which can lead to separativeness, cleavage and crystallization. But the thoroughness and discrimination with which the fifth force works in the mind and the intellect, leads the way ultimately to understanding and to the revelation of truth. 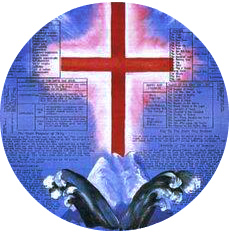 The seeds of all devotion and desire pour forth through this energy. It generates adherence, intensity and persistence. The determination resident in this ray is a fiery essence, sometimes full of force, fury and even fanatical display and militant violence. Abstraction and aspiration characterize the sixth force, in the sense of an idealistic nature, loyally oriented toward the causal levels of being. The sixth ray is the power to recognize what is right and righteous, the upward tendency and the capacity to see the light. 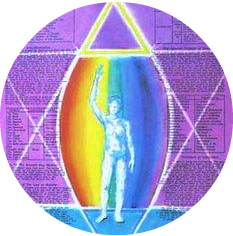 This ray is seen as the most tangibly expressive on the outer planes. It is the quality of relationship between spirit and matter. It is rhythm which builds, integrates, circulates and manifests. It is the bringer and producer of newness in form. The relational power of this ray motivates law and order, rule and ritual, organization and group consciousness. It is practical understanding and vital energy externalized, which embodies both the center and the periphery.

In the human being, “a ray confers … peculiar physical conditions, and determines the quality of the astral-emotional nature; it colors the mind body; it controls the distribution of energy, for the rays are of differing rates of vibration, and govern a particular center in the body (differing with each ray) through which that distribution is made. Each ray works through one center primarily, and through the remaining six in a specific order. The ray predisposes a person to certain strengths and weaknesses, and constitutes a principle of limitation, as well as endowing a person with capacity. It governs the method of one’s relations to others, and is responsible for reactions in form to other forms. It gives quality, general tone on the three planes of personality, and it molds physical appearance. Certain attitudes of mind are easy for one ray type, and difficult for another; hence the changing personality shifts from ray to ray, from life to life, until all the qualities are developed and expressed.” 2

It is clear from the quotation above that a human being consists of a mind body, an astral-emotional nature, a physical appearance, and a personality made up of three planes, ‘plane’ being another term for manifested energy. In addition to the physical, emotional, mental, and personality, a human being also exists on the plane of soul plus two other more spiritual planes. Thus, a human being is a multiplicity of seven. This multiplicity is known as the “constitution of man.” 3  One of the seven rays flows through and qualifies each portion of an individual’s particular constitution.

Knowing that one operates through multiple levels of being, each of which demonstrate particular qualities of energy can be helpful in our efforts to bring the Plan into being. The Plan, as presently conceived, has three major objectives: raise the level of human consciousness, clarify the international situation, and grow the group idea. 4  Everyone, whether they know it or not, is involved – some consciously striving to support the three objectives, some actively doing otherwise, and most trying to do the best they can with limited understanding.

The best method for expanding understanding so as to bring the Plan into being is to live a spiritual life, defined as the “outcome of right thinking, meditation, and service.” 5